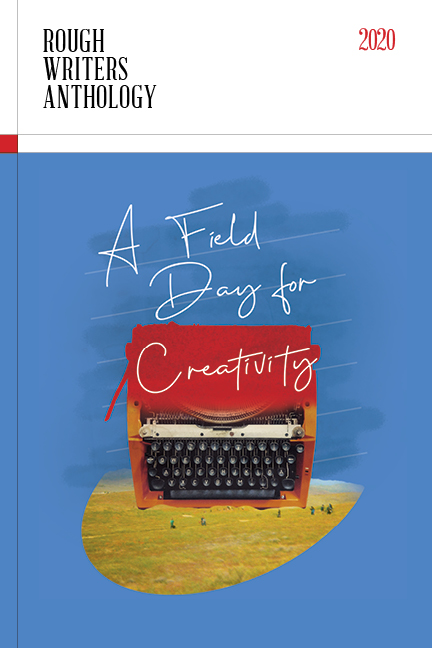 I have an exciting announcement for y’all today: we have just published the Rough Writers 2020 Anthology: A Field Day for Creativity. This is the third Rough Writers Anthology (they published a collection in 2017, before I joined the club) and I think we’re really starting to get the hang of it.

You may remember last year’s post about the 2019 Anthology. Well, as we all know, no good deed goes unpunished and I agreed to serve as Editor for this year’s anthology as well. At least this way, I was able to apply some of the lessons that I learned the hard way putting together the 2019 book.

The subtitle, A Field Day for Creativity, was proposed by one of our members as a response to the prompt and our club’s innovative way of applying Toastmaster’s curriculum to our creative writing pursuits.

Good. Here’s an excerpt from my story:

Mrs. Bistone’s perfectly rendered exterior was her armor. It was a barrier both invisible and impenetrable. People were so taken with the apparition in front of them that they didn’t even notice what she was getting them to do, or say, or agree to. Her directives tended to be delivered in the form of questions, those kinds of small requests that would be rude to decline. She wouldn’t say she was manipulative. She just understood that by exercising absolute control over how she presented herself, she could exercise the same control over that to which she presented herself.

Everyone who had met her would say that they knew her, that they were dear friends. They would describe her poise and immaculate appearance in detail, but no one could ever recall one personal thing about her – where she grew up, what her interests were beyond the banal hobbies of any woman of means, or even the date of her birthday.  Moreover, no one ever seemed to notice, which was the way that Mrs. Bistone preferred it.

Aren’t you dying to know how that has anything to do with the photo?

Well guess what? I’m giving away several copies of the Rough Writers 2020 Anthology!

All you have to do is be a subscriber to this blog and leave a comment below by 5:00pm on Friday, November 20.

I only have a limited number of author copies, so depending on the response, I’ll come up with some random way to select winners.

If you don’t want to leave it up to chance, you can order your own copy on Amazon (and if you don’t want to use the hyperlink, just put “Rough Writers 2020 Anthology” in your Amazon search bar). There is even a Kindle version if you prefer.

Monday, November 23 at 7:00 pm is our official book launch on Zoom. If you would like to find out more about the diverse voices who contributed stories to this volume, please join us – just leave a comment below and I will send you the sign-in details.