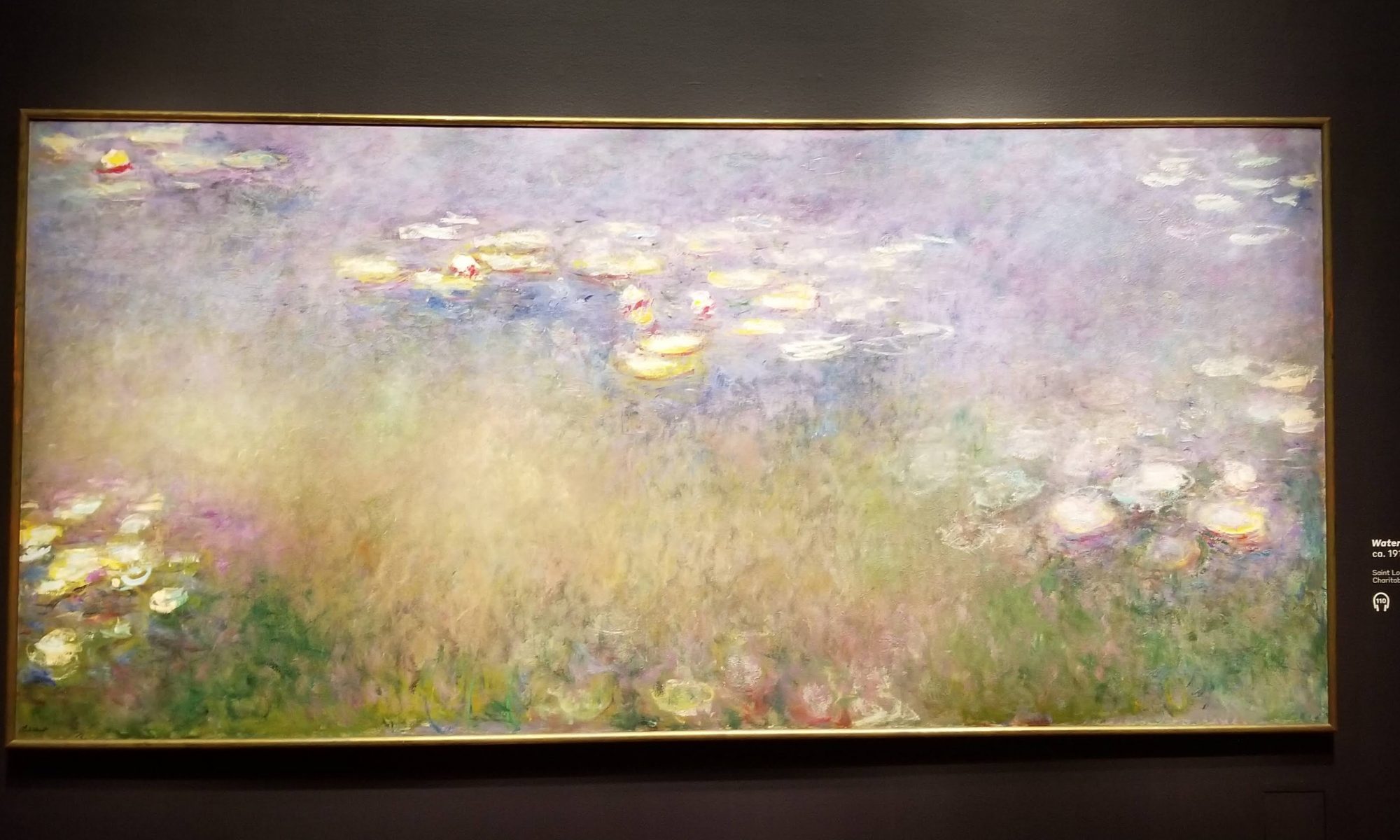 I happened to be in San Francisco for the weekend last May for Mother’s Day.  My dear, sweet brother-in-law had arranged for my mom and my sister to see the Monet exhibit at the De Young Museum for Mother’s Day and since I was in town, I had the good fortune of getting to tag along.

I thought that it was interesting that Monet was such a prolific and esteemed artist that the 50 or so works in the show were all made after he was established and successful.  The subjects of these paintings were almost exclusively locations in his own gardens on his estate in Giverny.

For great biographical information and a more comprehensive description of the paintings in the show, check out this page on the De Young Museum website.

The earliest painting in the exhibit is Morning on the Seine from 1896.  Unfortunately, I didn’t take a better photo of it.  At first glance, it seems just very grey, soft, and muted.  But when I really took a moment to look at it, I started to notice a tremendous depth to the foliage.  Monet used many different green and purple tones to build these shapes that appear flat from a distance, but up close have an unexpectedly rich dimensionality.  Once I got sucked into this painting, I started to notice the subtle contrast between the way that he rendered the landscape and its reflection in the water.  This is the kind of painting that you could look at for years and notice something new every day.

More than 20 of the pieces in the show were water lily paintings.  This is such an iconic Monet subject and one that is so often reproduced on merchandise that it seems like something that you think you have already seen and not necessarily special.  But seeing so many different variations on the same subject all together was fascinating.  Particularly when there were multiple paintings in a series that all portrayed the exact same vista from the exact same spot.  When was the last time that you really looked at something that you see every day?  Try it.  And then go back again a few hours later and take a moment to look again.  Think about how it now appears different from what you saw just a bit earlier.  What a wonderful reminder that everyday things we think we have already seen have something new to offer us if we can be bothered to take a moment to open ourselves up to them.

I took many notes on the differences in paintings of similar subject matter, the variations in color and texture and focus and size of various pieces.  Another subject of Monet’s that gives a very explicit example of this were the paintings of the Japanese Bridge.

One thing that I found even more unexpected and interesting were the paintings where he really just seemed to have to get the idea on canvas as quickly as possible.  These were paintings where the canvas showed through.  There was a raw-ness and an energy to these works that really spoke to me.

Toward the end of the exhibit was a series of Weeping Willow (1918-1919 and 1921-1922). I think there were more than the three that I photographed.  The later piece just blows my mind a little bit. This is the same guy painting the same thing that he had already painted over and over and it is so different and unexpected!  Now, this was all during the period when his vision was degenerating, but that alone does not explain the difference.

I am so glad that I had the opportunity to tag along with some of my favorite mothers on their special day.  It was a great opportunity to be reminded of how much there is to see if we just take the time to look.

One Reply to “Monet at the De Young”